zalbee's wtf game of the year

There are a lot of games on the Internet. But every once in a while, you find something that just makes you think "WTF is this? I can't believe they made a ______" and "Oh my god this is awesome." And so, every year or so since 2004, I've been personally selecting a game that is so absurdly good to be the WTF Game of the Year.

A WTFGOTY is insane and original, yet still yields unexpected entertainment. The only rule for a game to be listed here is that it must be a real, well-made, and playable game -- so anything that is bad on purpose to be ironic, or has no gameplay other than "haha, you died" is disqualified. Most games will also be made by indie developers and freely available online, though I might consider commercial games if they really fit the spirit of the award. If I don't find any game good enough for the whole year, I will skip it. This isn't something where you can round up a group of games and pick the closest one. When a WTFGOTY comes along, you just know.

With that said, I now present to you all of zAlbee's WTF Games of the Year! 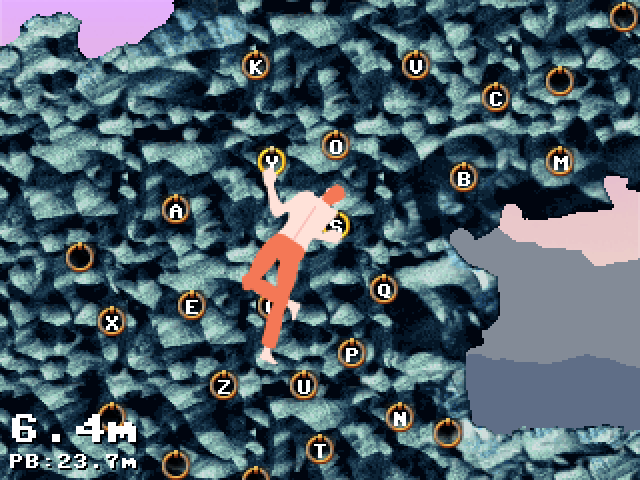 OK, so the last game wasn't actually released in 2011. As a bonus, I also present:

GIRP, a rock-climbing "simulation" by the same creator as QWOP. Thankfully, no individual muscle groups this time. Instead there are two inputs, mouse-click to tense your muscles (damn it!), and... wait for it... your entire keyboard. Yep, each hand-hold has a unique key. Press the right key, and your climber will grab hold. Let go and he lets go of that handhold. Which means you'll be contorting your hand all over the keyboard to play this game, with almost as much effort as it would take to actually go rock-climbing.

Oh, did I mention there is a damned seagull that keeps getting in your way? Have fun. I wonder what's next? A swimming game where you must manually breathe, and if you forget, you drown? 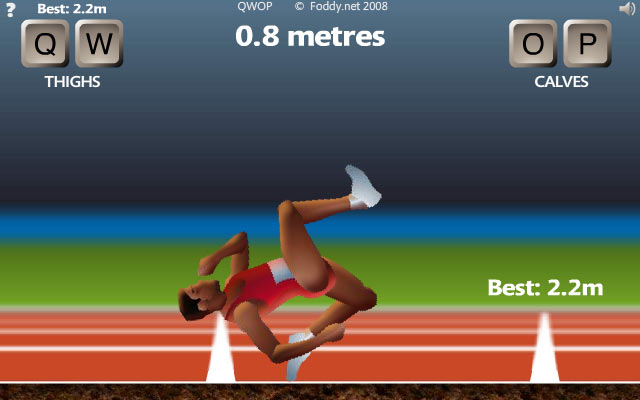 QWOP, named for its "unique" control scheme, gives you the mundane task of running a 100m race, and yet it is possibly the most ridiculous of all the WTF games I have reviewed. Somehow, the creator came up with the brilliant idea to let you control each of your characters' individual leg muscles - a wholly unnecessary level of precision! Instant chaos. Half the fun is watching someone else try to play the game all flabbergasted. Here, watch this Youtube video of a guy struggling just to get his character to not topple over backwards.

That's not all. So after countless practice, just like a toddler learning to walk, you have retrained your fingers to QWOP? Halfway through the race, there is a hurdle in your way that you need to jump. Just a single hurdle. This game's creator is a master of absurdity. And if you reach the end? A long jump. So if you are crazy enough to beat the game (and people have), you can compete for the longest distance score. 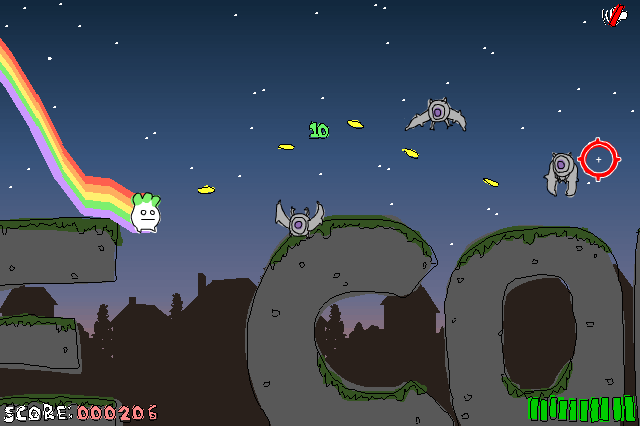 Raitendo has a history of making intentionally silly games -- even the name "Raitendo" suggests its games are a parody of other (authentic, but maybe crazy) games from Japan. So I was reluctant to include Action Turnip in this list at first. However, I do love this game and it actually has lots of replay value and a pretty sweet soundtrack, so here it is.

Action Turnip features a running turnip that has to shoot down flying bats, collect powerups, and occasionally fly with a rainbow shooting out of its ass (by the way, I do believe this precedes Nyan Cat). Some of the powerups alter the game into either a psychedelic or black and white colour scheme, which I felt which were unnecessary (it seems like the game tries too hard to be crazy). But the best part of this game is actually when the ground underneath you turns into giant letters that spell out messages like "NICE COMBO!" causing you to trip up and fall. Watch out when the credits start showing up while you're playing. LOL.

One thing I have to give credit for: there is a Turnabalt game mode that is a homage to Canabalt, the father of all infinite running games. 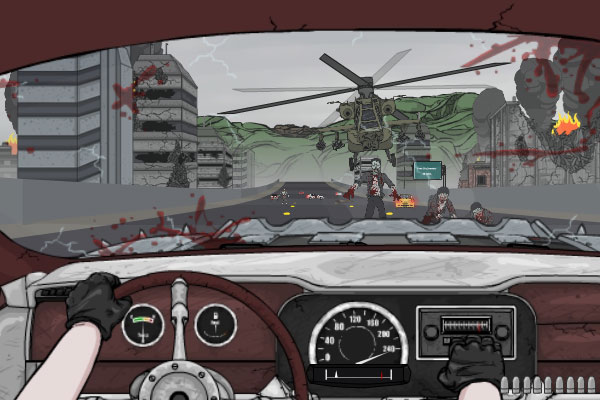 Finally, a game that combines quick-reflex road racing with mindless zombie killing. On a near-endless highway, you must drive some 40+ Km to escape a zombie-infested city. Along the highway you must dodge cars and trucks on fire, barricades, civilians, and zombies -- though hitting them is way more fun (they go splat). As if that weren't enough, the military is trying to stop you and will send everything from machine gunning soldiers to helicopters and bombers. Yes, they will carpet bomb you for trying to leave town. WTF?

My favourite part about the game is how it's so visceral. The driving part feels really good and the entire highway is seamless. There are no hitpoints and no unrealistic arcade powerups. Your car will only show damage through windshield cracks, smoke, and fire, and blood for yourself. The constant American army banter on the radio is a bit much though. I recommend zooming in for a better experience.

WTF Game of 2009: Конструктор: Engineer of the People 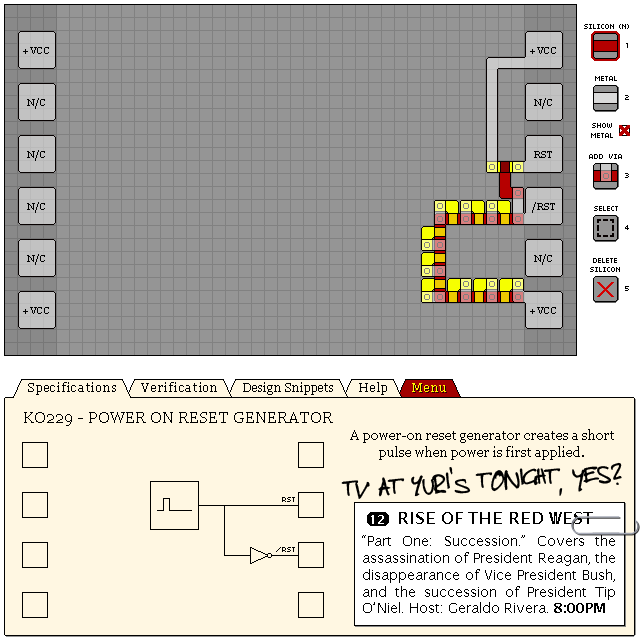 If you ever wanted to role-play an electrical engineer in the Cold War-era Soviet Union, this game is for you. Except you will literally be asked to design circuits like a 4-Input AND/OR gate and a Power On Reset Generator from scratch using only silicon and metal, and you will be evaluated on your circuit's performance on a variety of tests.

"I can't believe they turned VLSI into a game. W.T.F." --Erajah, actual engineer

Pronounced "konstrooktor", this game is like actual work... and really hard. Watching the tutorial video is a must, but you will still be woefully ill-prepared. I barely made it past level 6 (out of 19) before giving up. It's too bad because I really wanted to see how the storyline folded out, but the tidbits of story are few and far between. Soviet-themed music plays in the background while you tear your hair out trying to solve the levels. 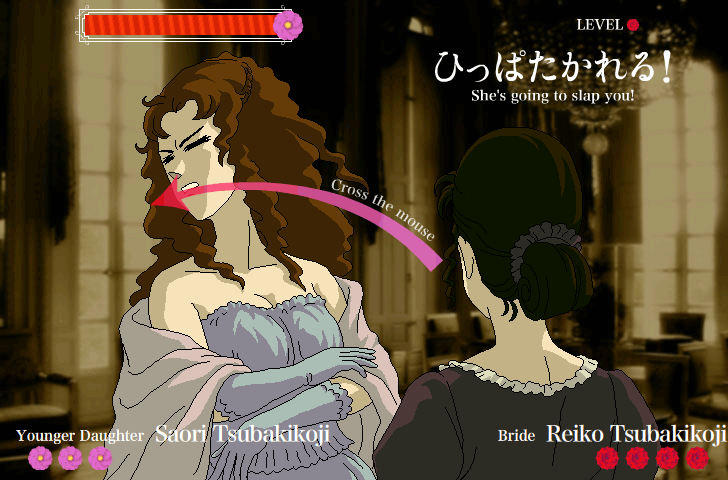 In this game, you enter in a face-slapping duel against your dead husbands' relatives who don't like you very much. Wait, don't go. Billing itself as "the elegant art of feminine conflict", the game has a sad backstory, unique characters, fitting music, and good difficulty progression. It's unmatched (and unchallenged) in the face-slapping duel game genre! I will now insert a quote from my good friend Inertia:

"The best part of this game is the sound the slaps make (the sounds get better once you get to higher levels)... and the final boss actually PUNCHES you with a closed fist - the thing sounds like you're being hit by a truck. The 2nd last boss' face is also hilarious, as is the housekeeper's tiger claw." 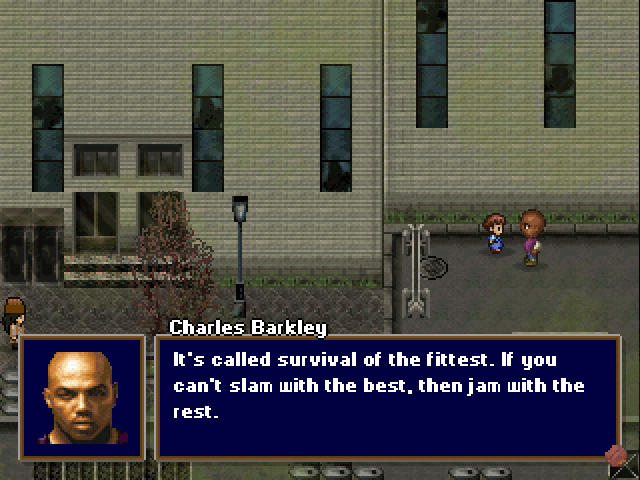 Oh my god, where do I begin? Tales of Game's Studios Presents Chef Boyardee's Barkley, Shut Up & Jam: Gaiden, Chapter 1 of the Hoopz Barkley SaGa is the full name of this game, nay, this epic RPG. The setting is "post-cyberpocalyptic" Neo New York, 12 years after basketball was outlawed. You play as Charles Barkley, the man responsible for wiping out millions in Manhattan with one deadly chaos dunk, the same event that triggered the great "B-ballnacht". Bitter and marginalized by society, Barkley is kept under watch by former basketball player turned law enforcer Michael Jordan, when he is falsely accused of performing a second, deadly chaos dunk.

Is this game as epic as it sounds? Absolutely. Just the fact that this game exists at all is epic. They were nice enough to add real RPG battle systems, 16-bit SNES-style graphics (sometimes cheesy), a fantastic soundtrack including a techno remix of Space Jam, and even an intro voiceover. If there ever is a Chapter 2 of the Hoopz Barkley Saga, the world might explode. 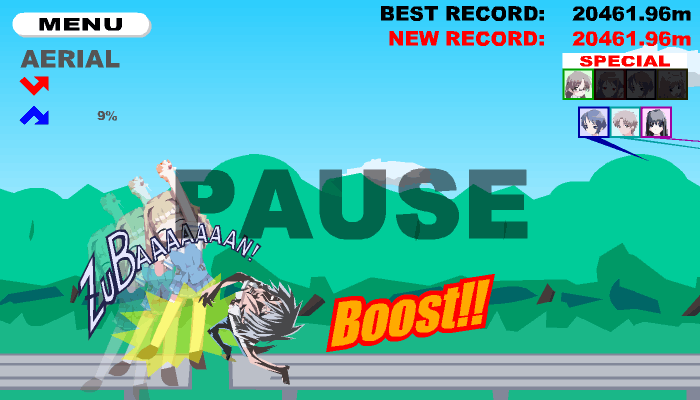 I'm trying to remember why I named this a WTF Game of the Year. I think it's the fact that when you first play it, you have no idea what the hell is going on. Similar in concept to the "hit the penguin" games before it, you need to launch an innocent male student as far as possible with your bicycle rush. Then all of a sudden he hits a schoolgirl on the ground and all hell breaks loose. The most rewarding part is when you activate a special combo and propel your guy with a swift martial arts kick unique to each character.

It seems like a simple game at first, but there's a lot of strategy involved to get a great score. While the penguin-hitting games were pure luck, with enough practice, the limited number of aerial attacks allow you to control your fate. Nanaca Crash is one of my favourite games. It has lots of replayability, and the awesome effects (in vector!) are just a bonus. 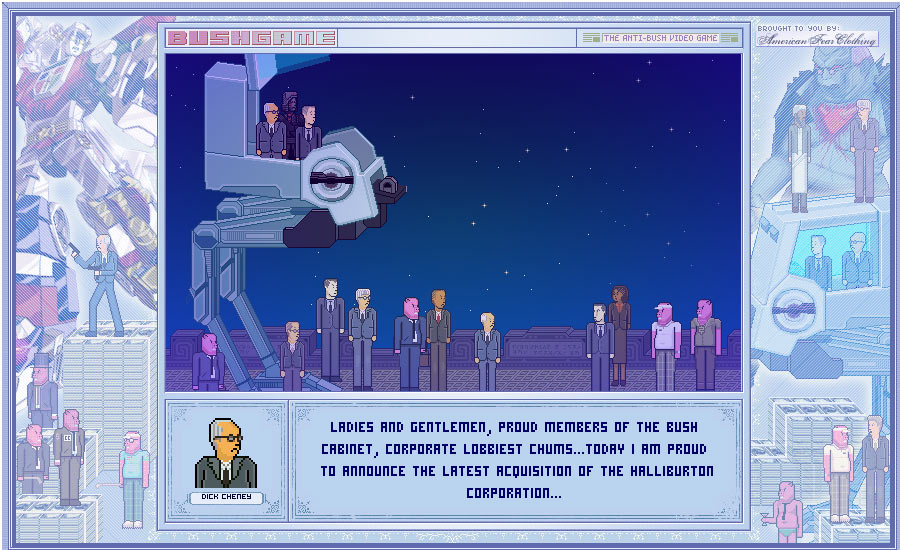 There are a lot of stupid games out there involving the former U.S. president (a quick search reveals Throw a Shoe at Bush, Spank Bush, Falling Bush, and Bush Shootout (which isn't bad)), but this one is different. It is a semi-serious, yet over-the-top, shoot 'em up drawn in an isometric, pixel graphics style. You play as a variety of characters, whose goal is to stop George Bush from taking over the world. It is blatantly political and was released in the 2004 election year in an attempt to go viral (it failed). That should probably disqualify it from my list, but if you consider the game alone, it has incredible WTF factor. One of the bosses is a giant George (Sr.) and Barbara Bush that shoots baby Bushes out. Another boss is Janet Jackson's boob. Playable characters include Mr. T, Christopher Reeve in a wheelchair, Jesus, and Howard Stern -- whose special attack is "Porn Star Attack". Need I say more?

The game controls are terrible and every character plays the same. But the imagery (often R-rated) and message is provoking. Spliced cleverly into the levels are educational segments with graphs or charts, providing damning evidence against Bush's policies. For example, there is a graph that becomes a bridge, a money elevator, and a gameshow. This game is both insane and tremendous at the same time. It can be fully played in about 45 minutes. 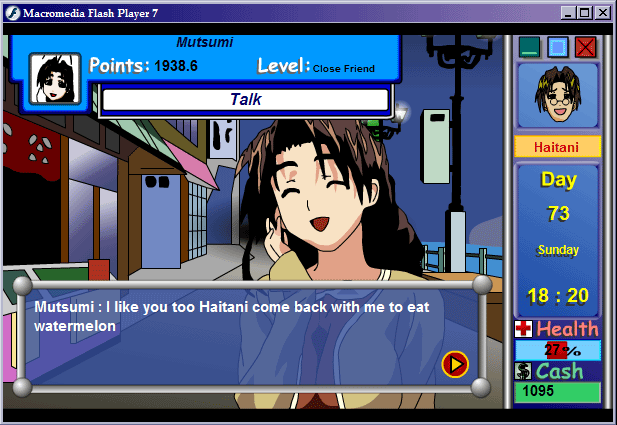 A long time ago, back before Flash games were as popular as they are today, I found this game which just floored me with its combination dating/fighting gameplay and "WTF"-inducing storyline. Yes, it's called a dating sim, but it also happens to be a profanity-filled fighting game. You know it's great when you can do perfectly normal things like "give girl an item" or "talk" and she says "let's fight instead!" It seems even more outrageous when you haven't seen the anime that the game is based on. The dialogue in the game is laughable, and the computer-controlled characters' actions are unpredictable. But simply interpret this as the girls being emotionally unstable, and it's a hilarious and unintentional parody.

The game itself is decent, drawn in vector graphics (no ripped sprites), has multiple endings, and is quite long by Flash game standards. Lots of glitches and lacks a save feature, but that is still pretty impressive for something from 2004.